Testimony of Marilyn Watkins, Economic Opportunity Institute, in opposition to SB 6578 and SSB 6087, before the Senate Commerce and Labor Committee, February 1, 2016.

Washington needs to raise labor standards so that people who work hard in necessary jobs can live in dignity. The minimum wage and sick leave standards proposed in SSB 6087 simply do not go far enough to protect public health and family economic security. State standards must be a floor, not a ceiling, and local jurisdictions should be able to continue to pilot new standards as our economy evolves.
One million workers in Washington do not get a single day of sick leave now, including many in restaurants, retail, personal care, and other occupations with direct public contact. A standard of only 3-5 days would be only a modest improvement, forcing too many people to continue to go to work sick. Norovirus, which is often spread by ill food service workers, is contagious for up to 7 days, according to the CDC. So is the flu. Nationally, the average worker with sick leave uses 4 days annually – but the average includes some who use none, and others who use higher amounts. We found in interviews with low wage Seattle workers, that 25% took no paid sick days the previous year, and 17% took 6 or more.[1] 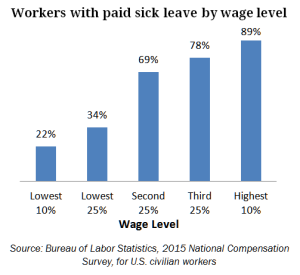 Washington’s working families also need a higher minimum wage than $12 in 2020, as proposed in SSB 6087. Even today, a single, childless adult working full-time at $12 cannot meet basic expenses in most parts of the state.[2] The vast majority of low wage workers in Washington are adults, many with families to support.  Over half of workers making under $13.50 are over age 30, and 3 in 10 have children at home.[3] Across the U.S., the lowest wage workers are also least likely to get sick leave, compounding economic insecurity: 8 in 10 workers in the lowest 10% of wages and 2 in 3 in the lowest 25% of wages don’t get any.[4]

Children from low income families would continue to suffer the most if workplace standards are removed or set too low. Their parents are least likely to have sick leave voluntarily provided by employers. When parents have inadequate sick leave, kids are left sick at school, older kids have to skip school to stay home with sick siblings, and children don’t get adequate health care – especially those with chronic conditions.

Because cities have led the way, we have data on impacts from paid sick leave laws. San Francisco’s law has been in effect since 2007, Seattle’s since 2012. Over 20 cities and 4 U.S. states (California, Oregon, Massachusetts, and Connecticut ) have paid sick leave laws in place. Most of these have much higher standards than proposed here.

Washington workers need to be raised up, not kept down. When working families prosper, our economy prospers and all our communities benefit.

[3]     Economic Policy Institute, “It’s Time to Raise the Minimum Wage,” April 2015, analysis of raising the minimum wage to $12 by 2020 for Washington state. http://www.epi.org/publication/its-time-to-raise-the-minimum-wage/#data-tables-characteristics-by-state6.

The Washington Work and Family Coalition includes representatives of seniors, women, labor, health professionals, children’s advocates, faith communities, low income workers, employers, non-profits and other organizations. We’re working together to make it easier for parents to raise healthy children and care for aging parents; for workers to care for themselves or their partners in the event of a serious illness; and for businesses to offer modern workplace standards that improve productivity and worker health. View more posts